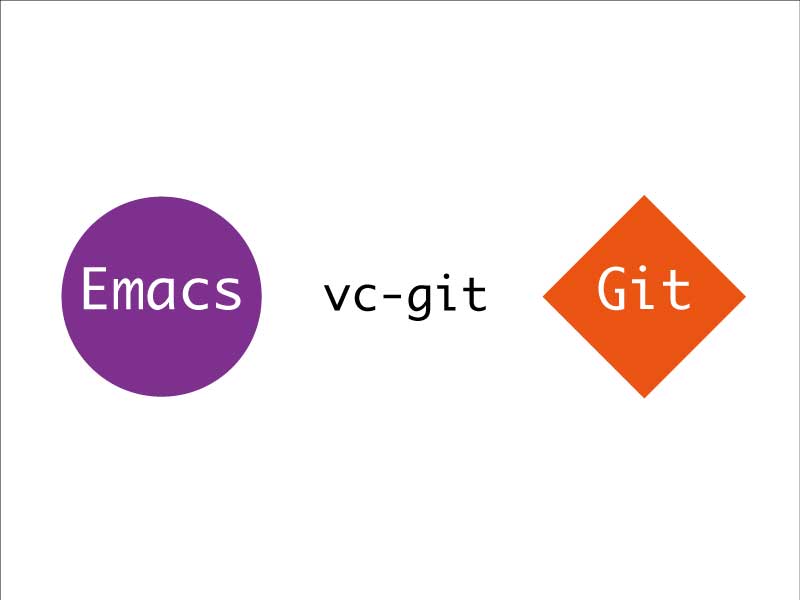 Hello everyone it’s me candle.
In this article we would like to use vc(version controll) which is included by deault in emacs.
It seems that vc supports to both subversion and git, not git-specific functions.

If you want to use git with emacs in earnest, I recommend magit.
On the other hand, since vc is installed in by default, it is good for user who want to use it easily.

You use emacs
You have a basic git skill.

Although vc supports to git, ‘git add’ and ‘git reset HEAD’ do not exist.

I do not know why, but perhaps it seemed to be trying to accommodate both git and subversion.
Since it is hard to use it, let’s add some settings and make it usable.
The setting was referred to the following article introduced from the official vc git formula.

However, the code written in the article did not work well on emacs 25, so I edited it a bit of work..

We create a something folder and create index.html in it.

OK we created the git repository which has only index.html.

Open the index.html with emacs and write this and save it.

Currently, you keep to open the index.html, try to display the difference of this file.
Run following command or type a short cut.

The command which is same as ‘git status’ is vc-dir.
You execute this command, you can see the whole of changes under the repository.

Now, you can see that tags were added to index.html.

You will be asked in which directory git differences to display.
Push the enter key. 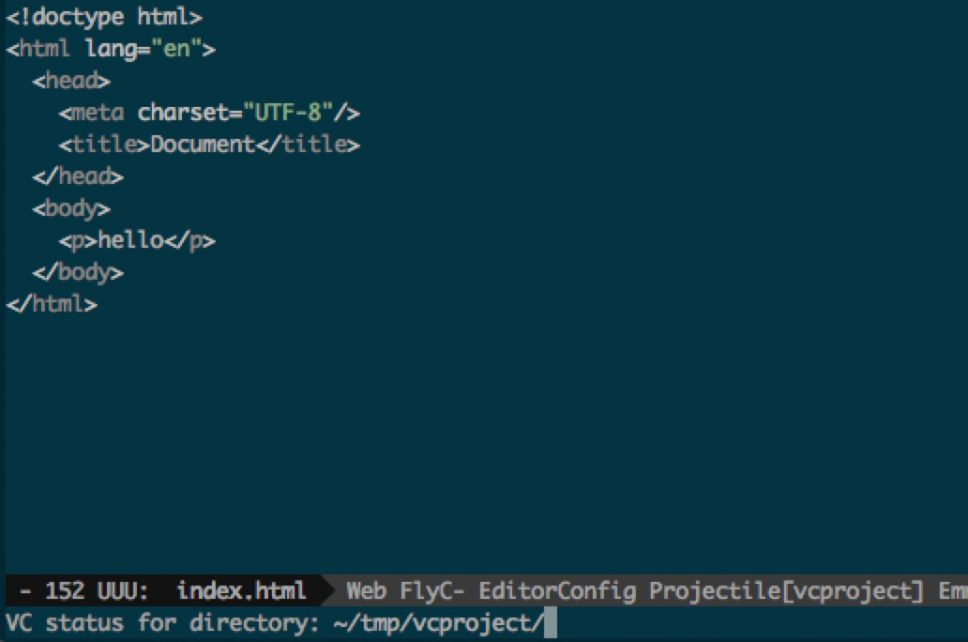 You can find out the what changes were made.
Move the cursor to the in front of file name, push the enter, you can move to that file. 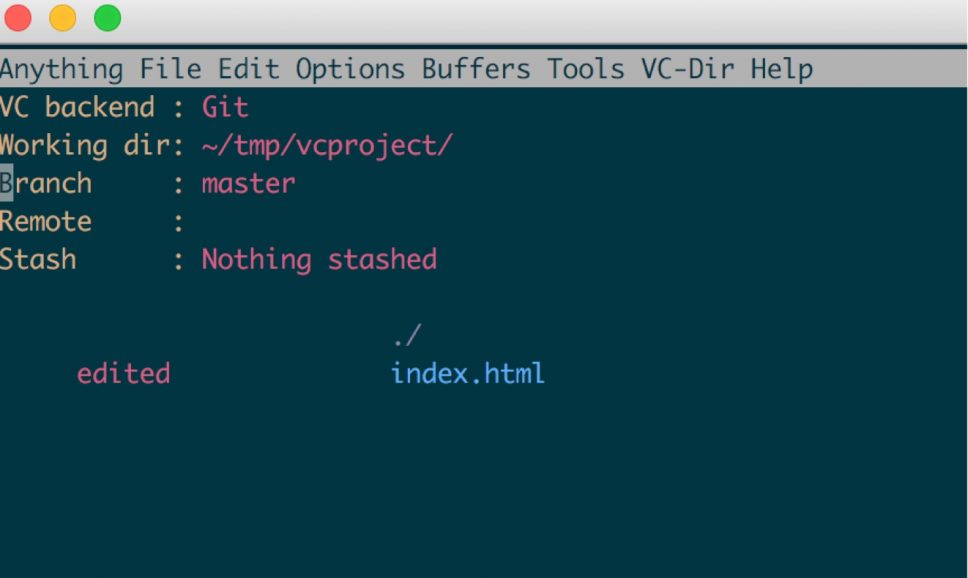 As I wrote before it, vc git doesn’t support ‘git add’ by default. but you can use it by above setting.
There are two ways to ‘git add’.

Do ‘git add’ from buffer 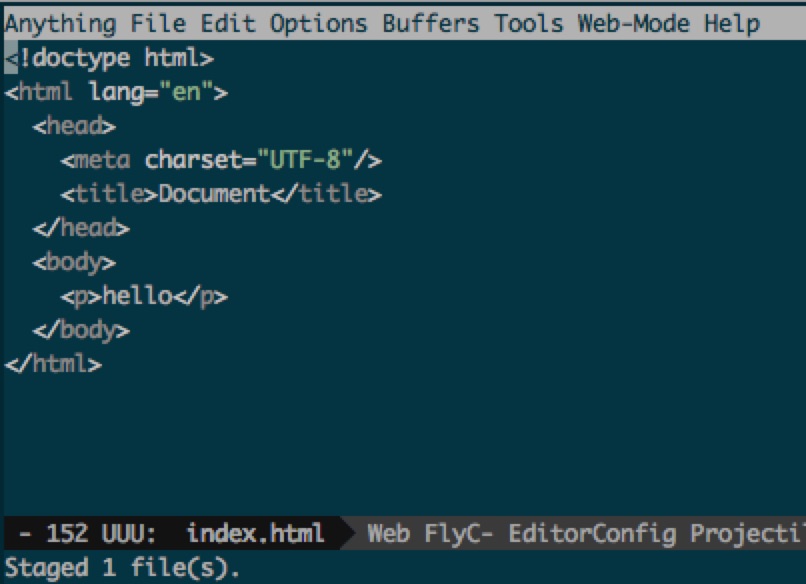 Do ‘git add’ from vc-dir

Another way is do that from the vc-dir window.
Open the vc-dir.

Move the cursor to the file you want to move to the index stage and execute the following. 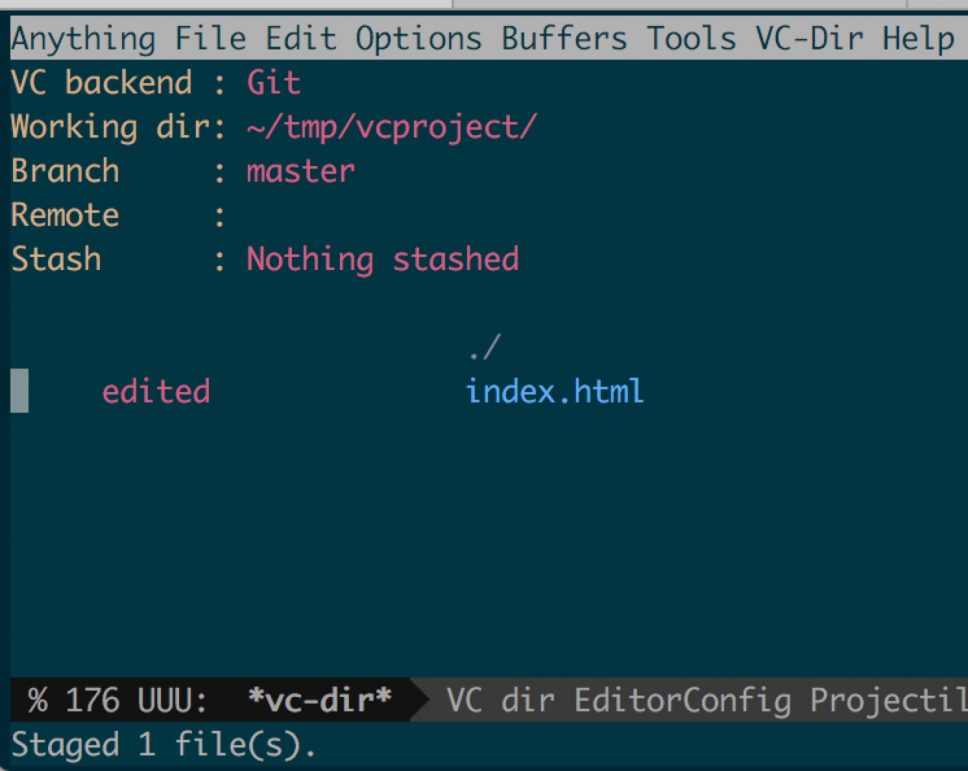 If you run ‘C-x v a’ around above the file name, all of the differences will be added to the index.
Unfortunately, you can’t see either the file is at index or not in emacs. So you need to run git directly with CUI, or use another gui tool such as gitup.

This is a confusing part especially when using git with vc.
When creating a new file, vc `git add` the file with vc-register function.
However, this ‘git add’ command is used only when a new file is created, and if you want to ‘git add’ the difference of already existing file, use my-vc-git-add.
Conversely, even if my-vc-git-add is added to a new file, it is registered in index stage on git, but it can not be committed because it is not registered on vc.

To summarize, once you create a new file, use the vc-register function.

Create index.css as a trial.

By running vc-dir, you can check the two states, index.html and index.css. 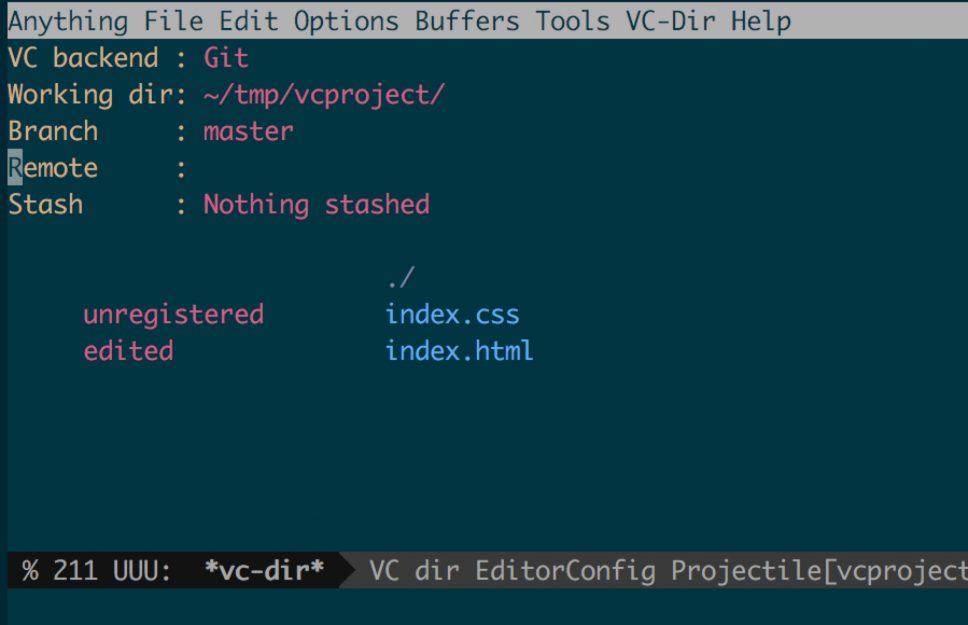 You can see the index.css status would be ‘unregistered’.

Move the cursor in front of ‘unregistered’, execute ‘vc-register’. 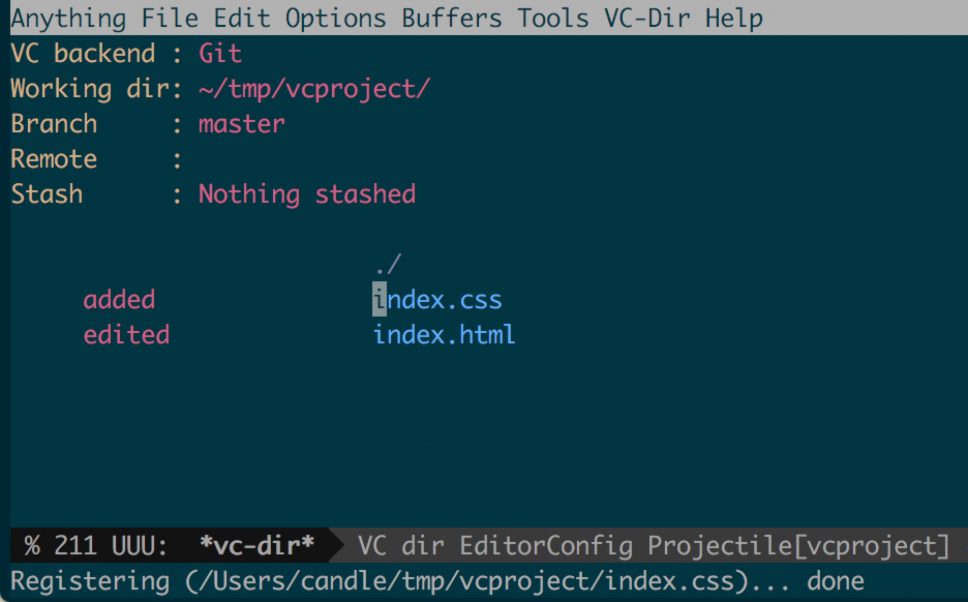 The status became to ‘added’. It is “git add index.css” in git.

‘git commit’ is vc-next-action.
Also there are two ways to commit.

Do that from buffer

At first let’s commit each buffer.
vc-next-action can commit a buffer even if buffer is not added to index stage. 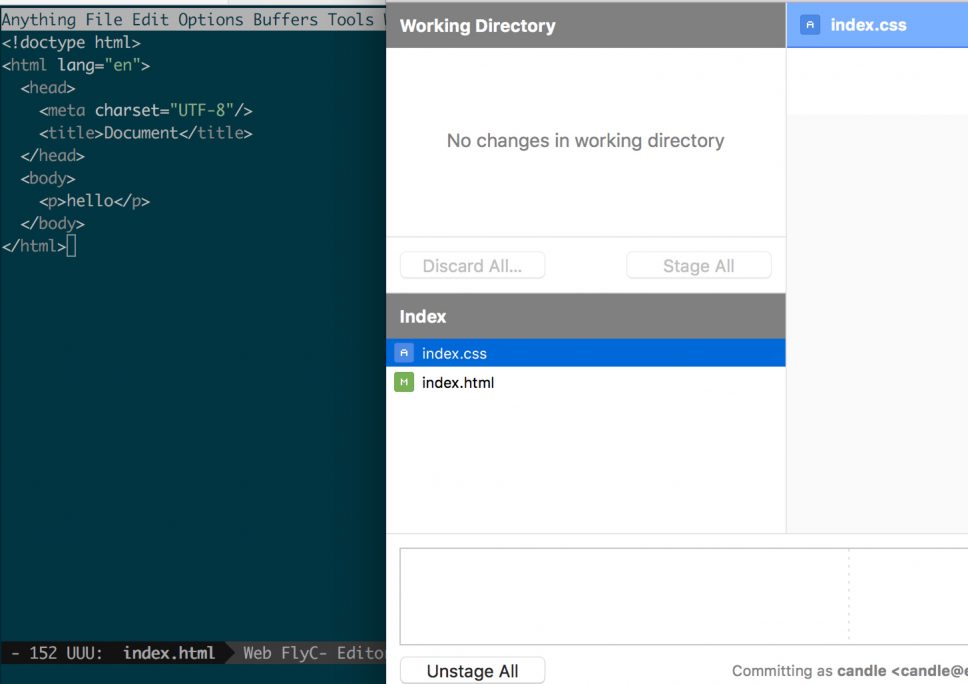 As in the above image, if there are differences of multiple files, you commit from the buffer, only that buffer will be committed.
Display index.html in emacs and run this.

Insert a commit text into the place of “Summary”. 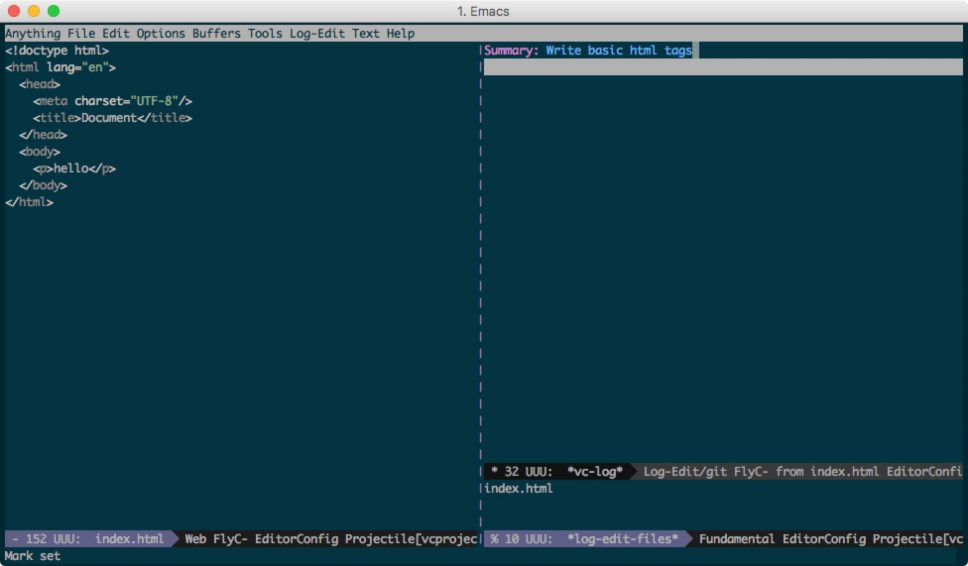 Type C-c C-c and then it’ll be committed.
Of course, as a large-scale application, I think that cases to change only one file and commit will decrease.

Next we try to commit whole of changes in repository.
Edit index.html to include index.css.

The current difference is index.css newly created and index.html with description to include it. 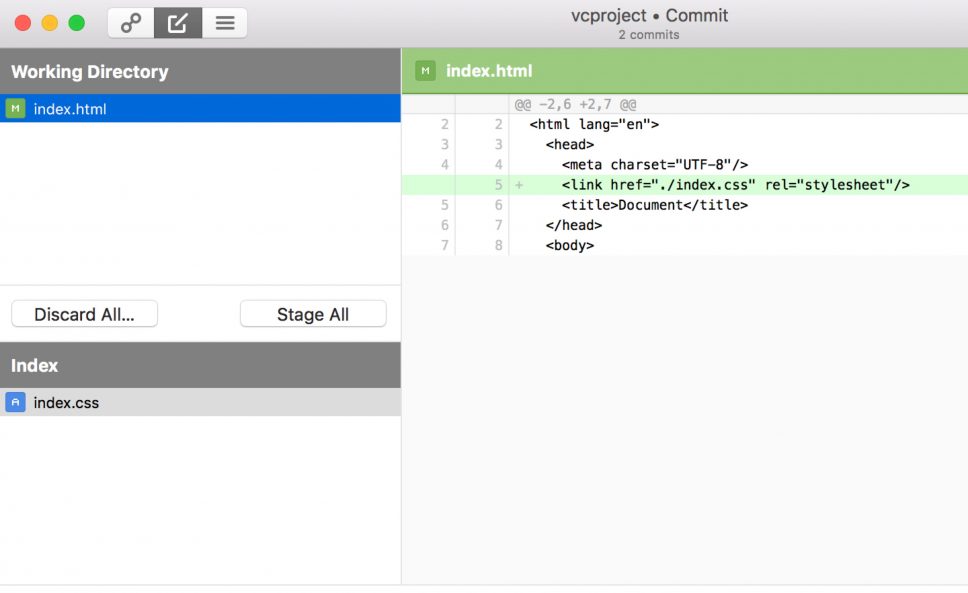 If you want to commit whole of repository, you need to execute it in vc-dir mode. 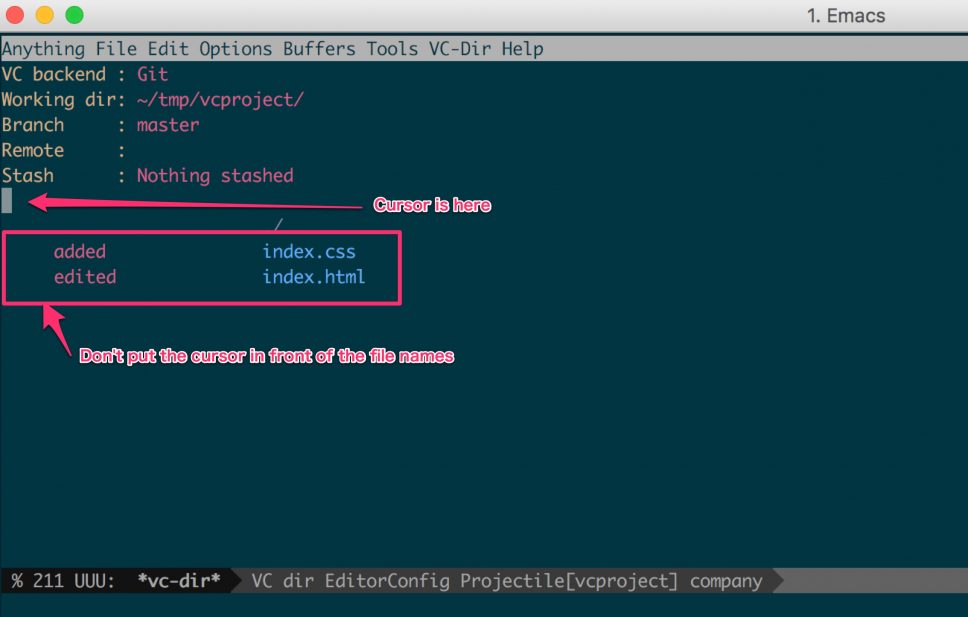 Insert a commit text into the place of “Summary”. 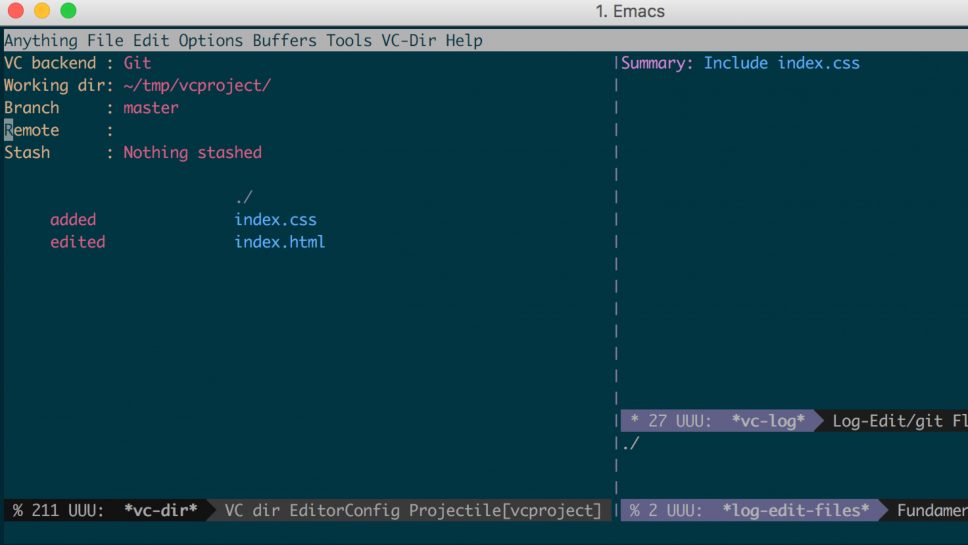 Type C-c C-c and then it’ll be committed. 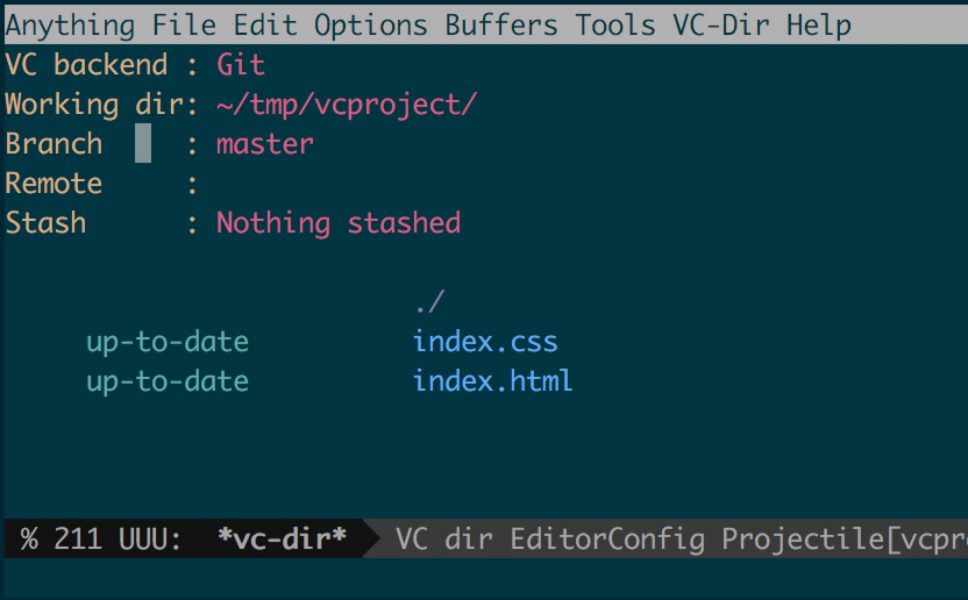 Open the index.css and write styles. 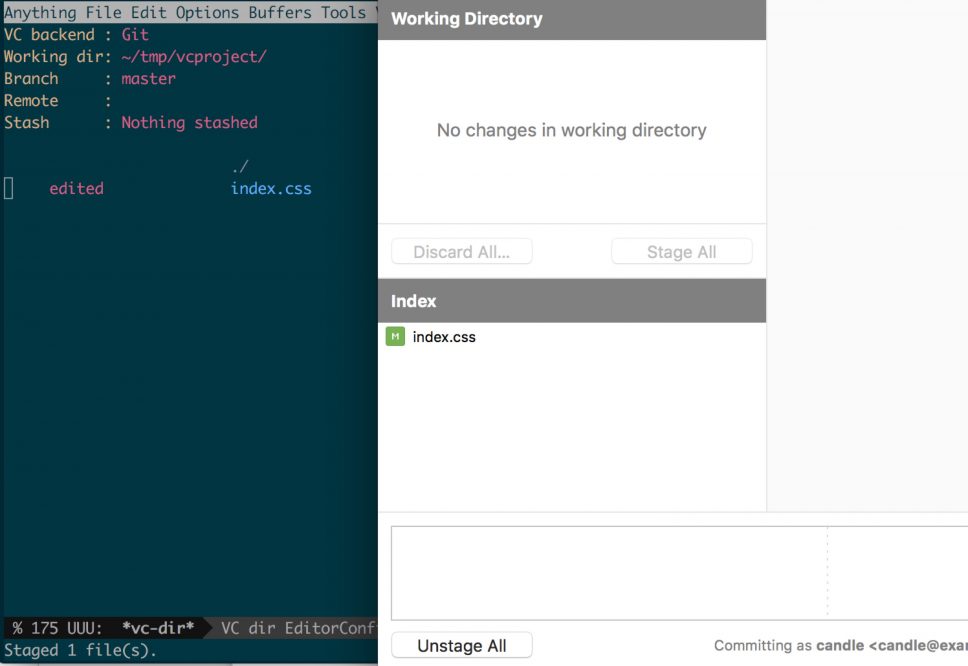 In the same way, place the cursor in front of the file and execute the following.

Or you can unstage by typing “u” in front of the file name. 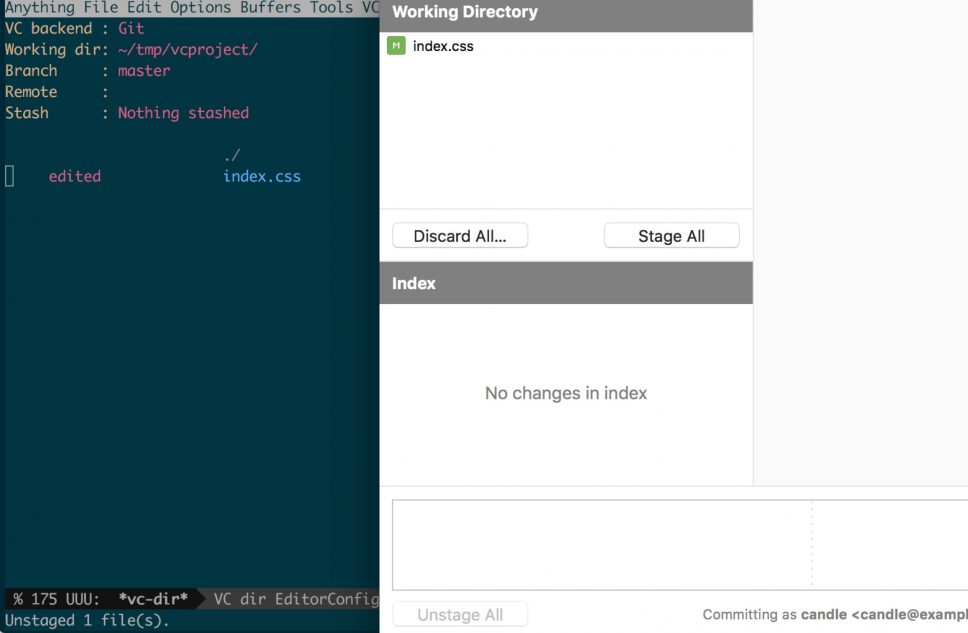 It is “git checkout index.css” in git.

You can deleteit in two ways.
First we do it on the buffer.
Display the file whose you want to delete change in emacs.
In this case, we delete below text in the index.css

To delete a change from vc-dir, execute the following in front of the file name you want to delete.

Confirm the differences of past files 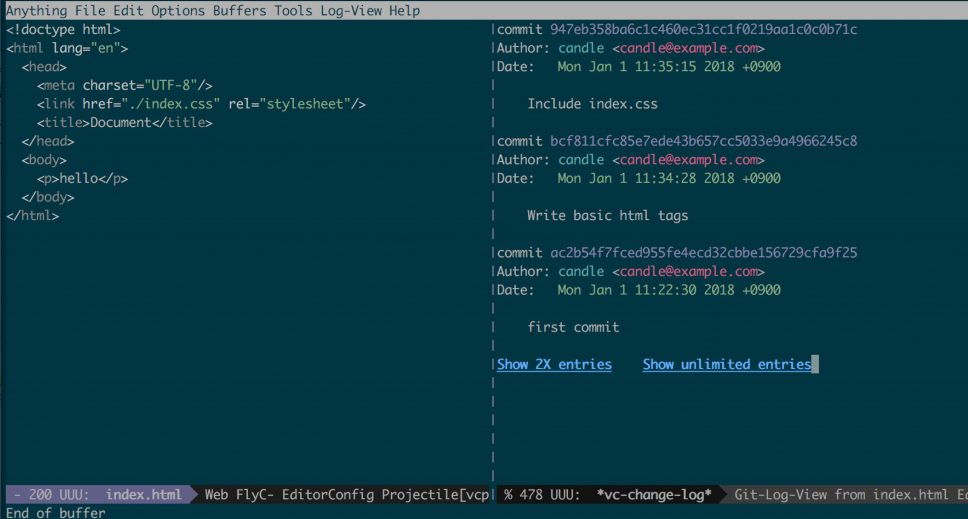 By pressing the f key in the commit hash part in the history, you can check the file at the commit time. 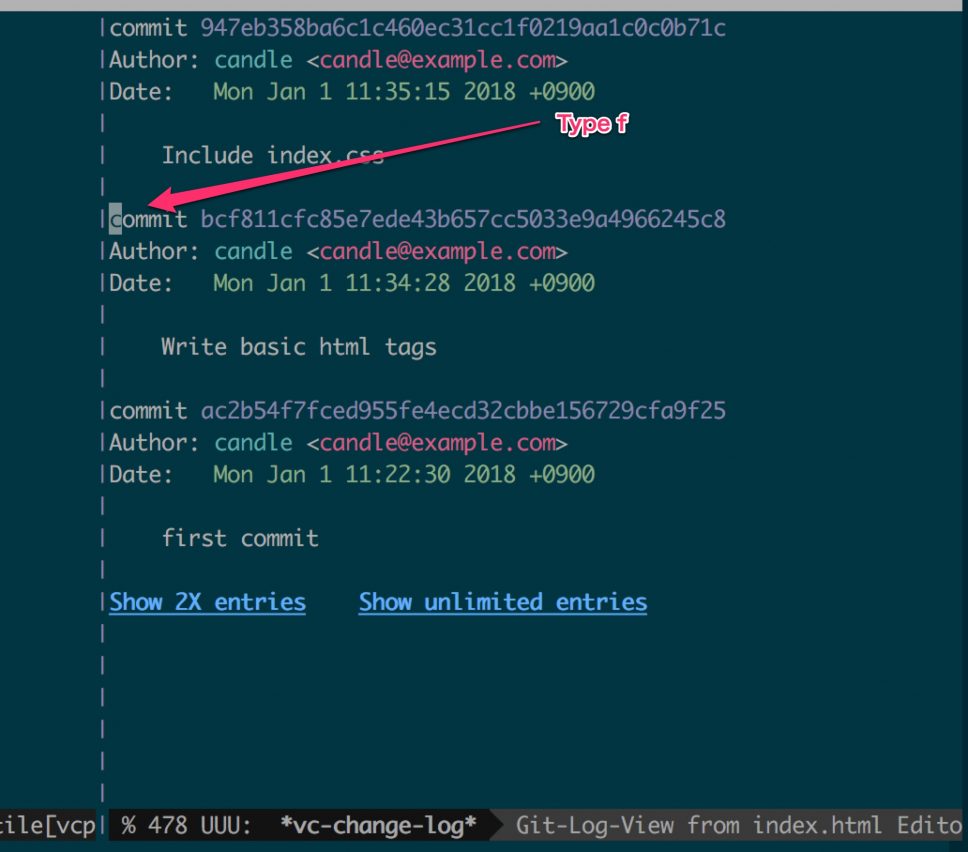 Although this file can be seen, there is a problem that if you see these files, past files are created in the same directory.

View the history of the repository

To see the history of the repository, execute the following command.

I summarized the basic usage of vc git.
Of course, I think that it is better to use”magit” for who want to use seriously.
However, I think that vc git is convenient. 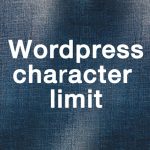 English 日本語 Abstract Hello everybody, It’s candle. Nowadays, when I used free themes for wordpress at the company, I noticed that. Many free theme use the_content function which expands all the contents of individual articles in the article list, and it is very irritating. However, editing a free theme is troublesome. We use the “Advanced Excerpt” plugin to limit the number of characters displayed in the article list and make it easy to see. We use the free theme “twentyeleven” as a sample. Before After Premise There is a wordpress. 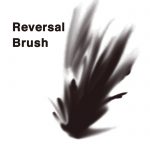 How to invert photoshop brush

English 日本語 Abstract Hello everyone. It’s candle. In this time, I’ll show you how to invert brush effect. Precondition Nothing 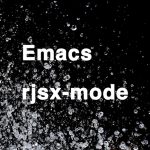 Develop React in emacs in rjsx-mode

English 日本語 Abstract Hello everyone this is candle. In this time I would like to introduce rjsx-mode of major-mode for react development of emacs. The development of “react” has been tried and errored between emacs users, such as using web-mode or js2-jsx-mode of js2-mode. Also I had been used js2-jsx-mode before rjsx-mode. Since rjsx-mode is an extension of js2-mode, users of js2-mode can use it without discomfort. rjsx-mode has auto complete function of jsx. it’s fantastic. Precondition You use emacs You use melpa or el-get

How to use f.lux, blue light cut software

Abstract Hello everyone. In this time I will explain how to use f.lux. f.flux can reduce the amount of blue light as much as possible. f.lux can adjust the blue light cut rate with the seek bar. Please try using it. Condition You use Mac or Windows I will explain it in Mac PC. Download f.lux Go to the blew site. http://justgetflux.com/ Click the center “Download f.lux” button. Once you have downloaded the zip file, let’s double-click it and extract it. Since The executable file is expanded in the download folder, move it to the Application folder. It’s over. Use … 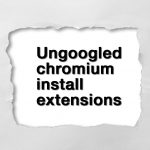 How to add extension to Ungoogled chromium

English 日本語 Abstract Hello everybody, It’s candle. I don’t use Google Chrome so much because I am firefox user, but sometimes I need to use Chrome for extensions. Google Chrome is slow, and there are some personal information protection is loose. Detail is here. https://github.com/Eloston/ungoogled-chromium So, I use ungoogled chromium. The problem of ungoogle chromium is that is not easy to install extensions. In this article, I’ll show you how to install plugins. This article is according to the under link. https://github.com/Eloston/ungoogled-chromium/blob/master/FAQ.md Premise Ungoogled chromium has been installed 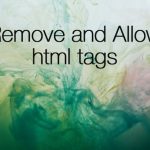 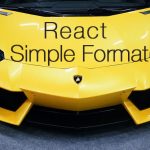 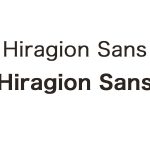 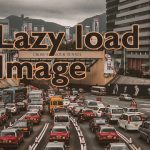 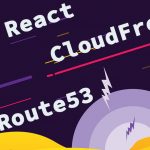